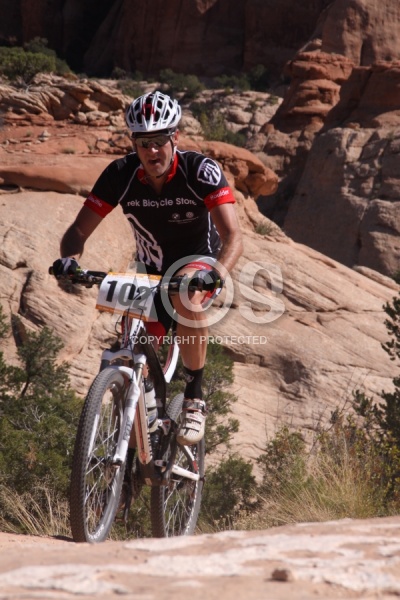 I’m really beginning to enjoy 24hour team events.  This years 24hrs of Moab was my 3rd, and most exciting.  We had three 4 man teams and 3 solos, 2 mechanics and Kathy supporting Jon and Tanner going solo, and a few other kids all at our camp.  There was always something going on during the race.  Someone coming in from a lap, or someone going out to start a lap.  Lots of discussion about what happened during a lap.  Eat, rest, and sleep if you got lucky.  With all the activity it made for a really good time.

Our team sponsor, Trek Bicycle Store set us up pretty well. They brought Joey and Eric, two of the best bike mechanics around.   They never dropped the ball and had our bikes ready for the next lap well before they were needed.   It looked like they were having fun too.

My team raced  in the 4 men championship class.  It’s a long story why were ended up in this class.  I knew it would be a big challenge, and we would have to dig pretty deep to be competitive.  The top three teams were getting sub 1hr, or 1 or two min over an hour lap.  Our team was putting in times between 1:07 and 1;30.  So basically we got our butts kicked, but we had a great time regardless.

The other teams did well too.  It was fun watching them race,  and watching  their races come together.  It was easy to tell everyone was putting in their best effort by the look on the  faces after each lap.

I was most impress watching  Jon and his 10 year old son Tanner racing solo.  Jon ended with 14 laps, matching his goal, and Tanner did 5 laps, remarkable for a 10 year old.  And that was not his first 24hr solo race. 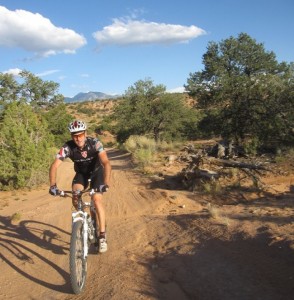 Out on a preride with the Photographer, Handy

As for my race,  I had better times then last year.  Some of the improvement had to do with a faster course.  There were great lines in the sandy sections. I also  left nothing during each lap, and pushed as hard as I could, where last year I tried to leave a little for each lap.   I’m pleased with my efforts with each lap, and don’t think I would have changed a thing.

This was my last big effort, except for maybe a cyclocross race or two, until sometime in November.  I’m taking a break from training and taking a much needed rest.  Then I’ll start training again around mid November for my next and largest effort, 24hrs in the Old Pueblo.  I’ll be racing solo there.