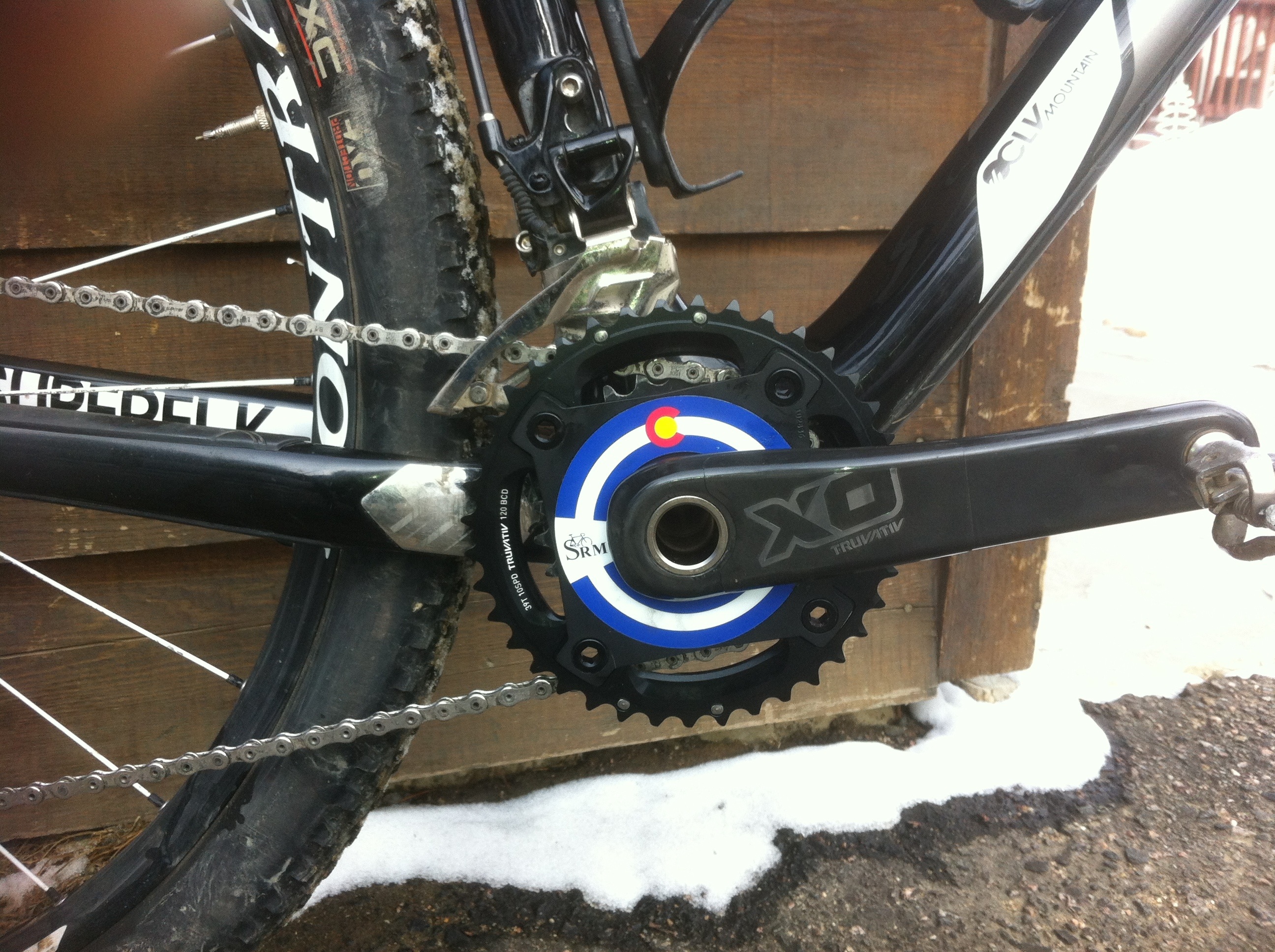 SRM is the gold standard in power meters.  I don’t know if they were the first to come up with a power meter for bikes, but they have been around a long time.  They were one of the only power meters available for  many years.  SRM is known for their high quality products and excellent customer service.   I recently received the SRM MTB  2×10 power meter for testing, which I have been pounding the dirt for the last couple of months while I train for and race the 24hrs in the Old Pueblo. I started training with power on the MTB and Road three years ago and have used the PowerTap SL on the Road bike, PowerTap MTB Disk on my MTB and I currently have a SRAM Quarq on my Road and MTB.  While training  in the snow, rain, through creeks and mud and of course dry roads and trails, i’ve really put these devices through the test.  Each of the above listed power meters have had trouble in all the adverse conditions.  My goal with the SRM was to see if this device would have trouble in MY normal riding conditions, which means snow, rain, ice, mud, sand and dry trails.

Whats in the Box

Out of the box the Power Meter included

Before installing the Power Meter you need to install the magnet on the bottom bracket.  SRM provided two magnets.  One to connect directly to the BB shell and one that will install under the BB shell that is connected to a little aluminum piece that mounts near the power meter.  The  magnet needs to be 2-5mm from the power meter to get accurate recordings. I’ve had a number of problems with mounting the magnet on two superflys (hard tail and full suspension)  with both the Quarq and SRM.  If you get the magnet to close to the power meter, the small chain ring bolts will hit it and you’ll either hear a click click click with each crank rotation, or if the (or when) the chain drops off the small chain ring the magnet will get knocked off.  I’ve tried many different  placement locations and different sized magnets and each time my chain dropped the magnet was knocked off.  This would occur at the most inopportune times, like during a race or the ever important intervals.   The trick is to find a spot on your bottom braket where the magnet is 2-5m from the power meter, and out of the chain line.  Of course, making sure your front derailleur is properly aligned will help too.  I have yet to find a perfect spot for the magnet on my MTB’s.  I asked SRM about this and their response was this “Magnet placement on the Superfly frame specifically is particularly difficult. We’ve been able to find reliable solutions for just about every other bike out there.”

After installing the magnet, you can add the  power meter which is as simple as adding or changing a crank set.  My bikes came with a SRAM XX GXP BB crankset and like the Quarq the SRM was a simple replacement of the XX set.    No bearing or washer replacement or changing was necessary. Keep in mind that if you have a non GXP BB, you  need another power meter with a different BB option.  SRM has many options. It is also easy to switch to other bikes if they have the same BB size and bearings.   I was able to switch between my two MTB’s in 10min.  Just remove the non-drive side crank arm and slide out the BB spindle and install on the other bike.  Piece of cake!  I have done this many times on my MTBs as I race and train on both my bikes throughout the year.

The power meter came with a PowerControl VII (see picture on right), which is a cycle computer that records the power, cadence, speed and altitude.    It mounts to the handle bar and sits out in front which makes it nice to see while riding.  It is a little vulnerable on a MTB.  One over the bar crash, the unit can be lost or broken (SRM says they are designing a new mount so the device is more protected).    It doesn’t have GPS, so it records speed with a wireless wheel sensor that mounts to your fork, and magnet fixed to a spoke on your front wheel.  Cadence is recorded by a magnet mounted to the Bottom Bracket.   Altitude is calculated by barometric pressure, like most GPS devices including the Garmin.  As a mater of fact the PowerControl VII is similar to the Garmin expect it doesn’t have GPS.  It does have a lot of the same features, but it is missing,NP, TSS and IF data points, which is great for training.

During many of my rides I used both the Garmin 500 and the PowerControl VII.  While cadence, speed and elevation where pretty close to each other, power was consistently 10watts higher on the PowerControl VII.  It really doesn’t matter that it was higher, but I thought it was interesting.  I mentioned this to SRM and they said to make sure that the Garmin Smart Recording feature is off,  which it was.   The most important aspect to this it is to be consistent with what you use.  If you are switching between two head units, you may get different values, which in turn may change how good you feel when you use a particular head unit.   I found that If you don’t have the speed senor on, when coasting for long periods of time, the power control will turn off and no data is recorded.

I found the reliability of the SRM power meter to be the best I have used.  I’ve used PowerTap SL, PowerTap MTB Disk, Quarq MTB and one thing those three had in common is they didn’t work well in abnormal riding conditions.   Water killed both my PowerTaps, Quarq MTB has problem with mud and snow if they get on the chainring, causing calibration issues.   A bad calibration leads to bad power readings. While training this winter for the 24hrs in The Old Pueblo I used the SRM exclusively.  I trained in snow covered, mud covered, dirt roads, for 6hrs at a time, many 20min threshold intervals, 3×3 VO2 Max intervals, and each ride the SRM worked flawlessly.   I was impressed considering the issues I’ve had with other power meters. I also raced the 24hrs in the Old Pueblo with it.  I relied on the power reading to assist with my pacing  and fueling strategy.  I raced 24.5 hrs with it and it was spot on the whole time, no recalibration needed. The one attribute I don’t like about the SRM power meters is that it does not have a user replaceable battery.  Given the battery is stated to last 700 hrs, which is probably more then a year for most serious riders.  To replace the battery you have to send it to SRM.  I am told the turn around time is fast, with in a week or two.  So if you time this at the end of your season, it’s really not a big deal.

Overall I am impressed with the SRM MTB 2×10 power meter.  It held up to the elements, it doesn’t get tired and works as expected.   The price is higher then all the other power meters.  Power meters can be finicky, especially when you put one through water, rain, mud, sand and snow and what else you can think of,   If you need a highly reliable power meter the SRM is the one you want.

Stay tuned for a comparison between the PowerTap MTB Disc, Quarq MTB 2×10 and the SRM MTB 2×10, and review of Stages Cycling power meter.