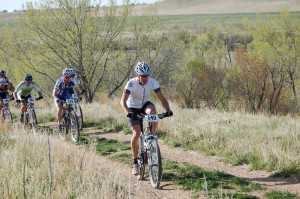 leading the group up the first climb at the start. feeling really good.

The Front Range 60 went down this past weekend.  I was a little nervous going into this race.  Not sure why.  It could have been that I was afraid I’d blow up  like I did at the Voodoo Fire, or that it’s a ridiculously fast course with some super fast locals. Or maybe it was the fact that last year I broke my rear derailleur cable in the first 10 min of the race, and after a 1hr long repair I was back on course racing to not be last.

The race was scheduled to start in waves by age group, no classes (beginner, sport, expert, pro) three min apart.  Instead, they called the pros up and and started them with the single speed class to go first.

I ended up starting 6 min back in the third wave.  Since I was 2nd at the last race in this series I got a call up and was in the front of the group of 70 others in my wave.    From the start I was leading the group up the short climb and into the single track.   I wasn’t going full throttle, and even going slow enough to allow someone to take the lead, at least that is what I thought. I didn’t want to have the pressure of being in first so early in the race.   My heart race monitor wasn’t working, so I had know idea of my effort only that I felt good, and not breathing hard. 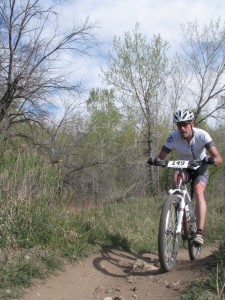 After five min, I went off course and was put down to the 7th or 8th spot, which pleased me so I didn’t have the pressure of leading, but with in 5 min I was back behind the leader (Brandon Eifrid) and from there we road 5 laps together, drafting each other lap after lap.  I thought the race would go down with in the last 100yds right after heartbreak hill, and the long sprint to the finish.

Up until the last half of the final lap, we road together, not able to make much of a separation on each other.  I did sense some weakness from Brandon on the climbs.   At the base of the last climb up Mt Carbon (about 4miles to go), I put the pressure on, and took advantage of some SS’rs that were marching up a short steep section.  Brandon didn’t get around these guys with me and I put the hammer down up the climb.   I made enough separation to keep the lead until the remainder of the race.  No sprint finish.  He finished 46 seconds behind me.

I thought I had the win, and the series leaders jersey.  But within minutes of finishing, my team mates informed me I was also racing against the times of the pros in my age group that started 6 min ahead of me.  WHAT!!

After 4hr of racing for first place, and the leaders jersey, the rush I had was diminished to major disappointment in that race promoters decision to make these last min changes. 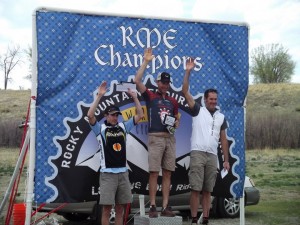 Doug Johnson, a  pro  from Colorado Springs took the win in my age group by 8:04 over my time, a screaming fast pace.  I’m not sure I could have stayed with him on this course.  If he had started in my group, I may have come in second anyway, but I’ve beat him before, so you just never know.  I ended up 17th overall, 2nd in my age group, 1st in my start wave, finish time 3:56:24.

This was a training race for me anyway, and I had a great time and felt like I did everything right during the race.  Brandon was a great competitor and I look forward to racing with him again.

Next up is the Original Growler, in Gunnison, CO.  A 64miler on some sick single track in the Hartmans Rock area south of Gunnison.  Dave Wiens is the race director and puts on a great event.