I had some high expectations for the Front Range 50 race last weekend.  I had been feeling good the last few days and my pre-ride times looked promising for a good result.   This race is part of the RMU series, where I sat second over all (pre Fr50), from my second place result at the Dusk til Dawn 12hr solo.    Last year I placed 8th in this race, which is an Open class by age group.  I expected I could beat my time, and improve my place at the same time.

The race started a little different this year, instead of a mass start with all age groups going at once, it was staggered by two min intervals.  We were the third group to go, with about 125-150 people on course already.   From the word go, it was a mad dash up a short 20% grade, which helps spread the field out a bit.   My teammate Bill and I made our way through the field.  After about 2 minutes, we started catching the group that started in front of us.  A constant, “on your left” was heard by a few of us making our way to the front of our group.  Passing was challenging at times, the trails are narrow, and most of passing was in grass and rough ground.

The passing continued for about 15 min, and just before the first big climb of the race I found myself around 5th place, the leaders in sight.  The trail starts to incline a bit, so I shift to a lower gear.  I continue to push the shifter, but the shifter is not working.  Nothing.  Only a small 11tooth cog.  Ah! 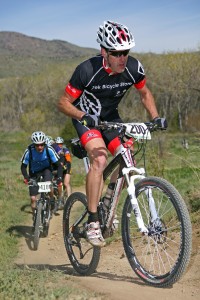 I get off the bike to inspect.  After a couple of minutes, I found my rear derailleur cable has busted.  Wow, never saw that coming.  Now I am not one to give up.  If I say I am going to do something I do it.  I avoid saying try.  There is try and try not.  Do or Don’t.   To finish the race, I needed to get back to the start and get a new cable.   I was about 1/4 the way through the course, with the hardest part  going forward.  I could run the rest of the lap, and pedal where I could, but the forward direction included mostly climbing and little flat or downhill.  All my chances in the RMU were gone, and placing well in the race was out of the question.

I decided to go back and short cut the course to get back to the start, where our team van was stationed, get a new cable and get back into the race.  Luckily, I was able to get the cable from our friends at Feedback Sports.  A full 1:02 hr after the race started, I set out on my first lap.

Now everybody on course was in front of me, this made passing and navigating the trail difficult.  The climbs were a wheel to wheel jam.  The only way to pass was  ride off trail, in the tall grass and rocky rough ground.    After my third lap, the traffic was getting lighter, and I could ride most of the course on the trails.

I believe it was lap 4 where I was actually passing people on the same lap and I was no longer dead last.  I actually ended up finishing 73 out of 82 racers.  I’m not sure if everybody finished, all I know is that I DID!

I had a good time on the trail and glad I put the effort in to get my bike working and finish the race.  I pushed myself as hard as I could.  If anything, I knew it would be good training for some races just around the corner.

I’m ready for some redemption, and racing the MSC #2 Chalk Creek Stampede on Saturday, and then the Full Growler in Gunnison at the end of May.