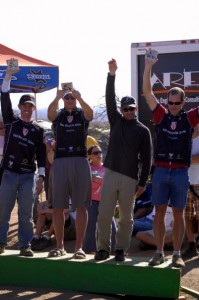 A few of my team mates planned to compete in the the 24hrs in the Old Pueblo, outside of Tucson, AZ.   I thought they were crazy to be racing in mid February, as I was just going to start  focusing on training.   However, I decided to tag along for the weekend and get some riding in, wrench on some bikes and help out while everyone raced.   Well, one thing led to another and I was suited up and ready to be the anchor (4th person) on the 4 man team.

I was pretty excited to be there and after pre-riding the course on my new Trek Top Fuel 9.9 SSL I was pretty stoked to race.   The course was super fun, not much climbing and almost all single track.  The main challenge was to avoid the cactus at every corner.  I got lucky and only got  a scratch, but many people had cactus sticking out of them.  It was quite a site.

I ended up doing 5 laps, and since I was last in the rotation, that put me in the night for three laps.   However, I really had a good time riding at night.  My times were decent with my slowest being 1:12hr.

In the end, our team placed 4th, in Mens Open.

It was a great time and I look forward to hitting that race next year, and getting on a higher step of the podium.

I have some pictures I’ll post once I can gather them.