What is Up with Cycling Orthotics?
By Ben Stein, MS
For MTBCOACH.COM

For those of you that are unaware of the use of cycling orthotics, they are used along with proper bike fits, cleat alignment, and shims, to adjust body alignment with the geometry of the bike with the intent to improve power and decrease risk of injury. Some orthotics companies even claim to be ergonomically designed and “scientifically tested” to increase power output, endurance, and comfort by optimizing hip, knee, and foot alignment (Specialized, n.d). There is literature on the internet that speaks to these claims and discusses the use of cycling orthotics but little empirical evidence exists to support such claims (Jeffrey, n.d; Zin, 2013, Specialized, n.d). In this blog post I will attempt to gather the research and try to clarify these claims.

What the Research Says:
There is limited investigations into the effects of cycling orthotics and in-shoe wedges used during cycling (Yeo, 2014). Currently, most evidence points to the benefits of orthotics and wedges through increase of contact area under the foot and plantar pressures under the first metatarsal (big toe), but this research has shown no benefit in gains in power (Yeo, 2014; Koch, 2013). Based on the most up to date available evidence, there are no definitive benefits of cycling orthotics on lower body kinematics, oxygen consumption and the effects on power during cycling (Yeo, 2014).

Furthermore, in their investigation of cycling orthotics effect on knee kinematics, Meyers et al. (2015) found that orthotics have minimal impact on lateral knee kinematics. When investigating carbon insoles during a Wingate test (max power output), Koch (2013) determined that there was no significant difference between the control, soft insole, and carbon insole. Additionally, as sited by Callaghan (2005), nearly 30 years ago, it was determined that full length or rear-foot orthotics are often inappropriate in cycling because they are incapable of preventing abnormal knee motion at a high power output.

So What is Up with Cycling Orthotics?:
As the research points out cycling orthotics provide little evidence that they can decrease cycling related injuries or increase power output. Although there is not strong evidence for benefits in cycling mechanics and output, I can personally attest that can optimize comfort in the shoe. I have a pair of custom cycling orthotics (Foot Dynamics, Boise, ID) and feel that the added comfort they provide does benefit me. I put my orthotics into a pair of Bont, heat molded, cycling shoes and feel like my foot is one with the shoe and have very little extra movement. This is most likely the common conclusion for cycling orthotics (Yeo, 2014).

What if I Have an Injury:
In my opinion, cycling injuries are typically due to overuse or a muscle imbalances. Cycling injuries can be due to muscle imbalances in the hips which can lead to misalignment while pedaling. In a recent blog post I touched on exercises to help improve power and decrease injury (link). However, if you are having pain in your feet or feel that you have some over rotation of the tibia caused by over pronation or supination of the foot ,it is best to consult a trained podiatrist or professional foot person 😉

Take Home:
Custom and semi-custom foot orthotics (Specialized, Surefoot) may help re-align the foot, in the shoe, on the pedal and may assist with increased comfort. The three spots On the Bike that the body is in constant contact with: the hands, seat, and the feet; orthotics can play a small role in pedaling mechanics and comfort. However, more research is needed into whether the use of cycling orthotics will decrease the risk of injury, increase power output, and/or improve body mechanics while cycling (Callaghan, 2005; Yeo, 2014). 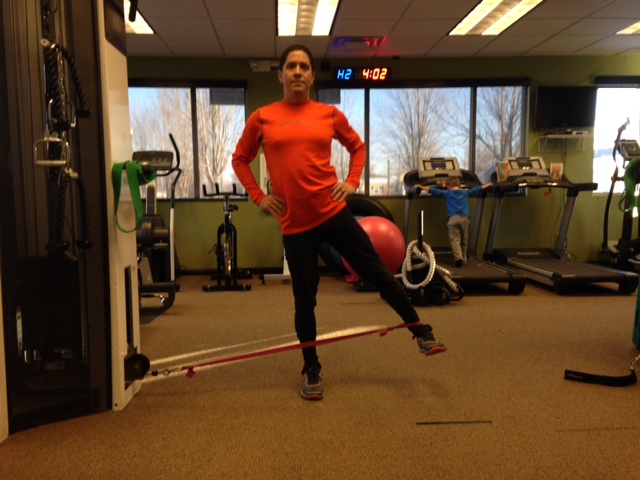 In the many bike fits that I have performed over the last few years, I have noted countless instances of knee adduction and abduction while pedaling. Adduction is movement toward the midline of the body and abduction is movement away from the midline of the body. These movements can sometimes come from the feet (usually an easy fix with orthotics), from a belly getting in the way of pedaling (abduction), or can come from weakness in the hips (adduction). Either way, this type of pedaling can lead to overuse injuries or ineffective cycling mechanics. Strengthening the hips can make a big difference in pedaling mechanics, decreasing injuries, and improving power.

When we typically think of the muscles involved in pedaling, the quadriceps and hamstrings get most of our attention. However, the muscles of the hips are a third area that helps to generate a cyclists power. During the off-season, I highly suggest that athletes get into the weight room and work on the specific imbalances that have been identified by a coach or trainer. One of the imbalances that I see regularly during my bike fits is weakness in the hip and thigh muscles, specifically the medial and lateral muscles of the leg. This weakness often leads to ineffective knee movement.

Below are a few exercises that can help stabilize your hips and may improve your pedaling:

1: The Step Down: Step sideways off of a stair or step keeping the hips level. Watch for the standing knee moving inward and do not use opposite leg for assistance. Bend the knee and touch the floor with the heel, then back up. Repeat 2-3 sets 12-15 repetitions alternating legs. When performing this exercise you should feel it just above stepping down hip, in the butt.

2: Theraband Hip Adduction: With threaband (or strap from machine) around ankle, and leg starting outward around a 30 degree angle, move leg towards the body. Repeat 2-3 sets 12-15 repetitions. When doing these you should feel them inner thigh. Try to not use assistance and work on balance.

3: Theraband Hip Extension: With theraband (or strap from machine) around ankle, push leg behind you while keeping knee straight, but not locked. Repeat 2-3 sets 12-15 repetitions. When doing these you should feel them in the butt. Be sure to keep pelvis square.

3: Theraband Hip Abduction: With theraband (or strap from machine) around ankle, move leg out to your side, about 30 degrees, while keeping the knee straight, but not locked. Repeat 2-3 sets 12-15 repetitions. These are the best! When performing these you will feel them upper butt, keep pelvis square.

4: Theraband Hip Flexion: With theraband (or strap from machine) wrapped around ankle, kick the leg forward keeping it straight. This exercise is more likely to assist with hip flexion strength. Repeat 2-3 sets 12-15 repetitions. Keep the pelvis square and you may feel these in the quadriceps.

Other exercise suggestions include clams, side bridge hip abduction, and side bridge. These exercises and more can be found at http://www.exrx.net. I would also recommend getting a bike fit from a professional bike fitter (someone skilled in kinetic anatomy). You can also try riding in front a mirror to watch your knee movements. Most importantly, practice resistance training and start strengthening those hips!

Recently, I was taking part in the “Turkey Cross” cyclocross race in beautiful Eagle, ID. Since I was racing later in the day, I was able to do a fair share of heckling. Most of my race heckling was done on the “run up”, a roughly 40-50 yard 150+ hill climb! Easily rideable by the strong riders… or the 15 year old female cyclist that challenged me to ride over the barrier at the bottom in addition to riding UP the hill! But that’s another blog post regarding pride and racing strategy.

Needless to say, the run up was the most difficult part of the course that day. While heckling, I noticed some racers were holding their breath while running up and over the small but difficult hill. “Not breathing” I thought? During this short burst up the hill the racers were performing what I could compare to the “valsalva maneuver”. Surely not in cycling, this is a weight lifters action, or so I thought. The valsalva maneuver occurs when a person tries to exhale while the mouth, nose, and glottis are closed and causing the blood pressure to increase (Wilmore, 2004). While I can probably write a few pages about the importance of oxygen during prolonged aerobic activity, I came to the conclusion that most endurance athletes already understand the importance of oxygen for muscle activation and metabolic processes. Thus, I believe that when an endurance athlete holds their breath it’s because they are performing an extremely strenuous action, like pushing their bike up and over a steep hill in a mountain bike or cyclocross event. Leading to the purpose of this blog… to remind athletes the importance of their breathing.

Or, what I like to tell my athletes “be mindful of your breathing.” The obvious reasons are to continue with oxygen delivery to our muscles but the practice of mindfulness is something few athletes are aware of. Mindfulness is a state of active, open attention on the present, or what is happening now (Dixit)! Take a breath right now, take three. You are now practicing being mindful. When you are mindful, you are able to observe your thoughts and feelings without judgment (Dixit). But this practice can also keep you in the “now” which can be very important during difficult physical activity.

An article, Psychology Today: The Art of Now: Six Steps to Living in the Moment, spoke to this idea of mindfulness. I found the most important take away for athletes from this article is that “you are not your thoughts.” I have started trying to take this focus to my personal races. In order to improve on performance, one must stop thinking about it during the event. Stop worrying about getting up the hill, but rather be present during the climb and breath.

An athlete’s performance can be hindered by negative actions. One of these negative actions is not breathing and holding your breath for short periods of time. Thus, taking a moment during your next race to be mindful of your thoughts and actions could positively affect your performance. The art of practicing positive thinking and being more in the moment may indeed be the key to a racers success. This can be said for both the amateur and professional athlete, if you are out there for fun then tell yourself “this is fun” or for the more seasoned rider the simple act of focusing on the racer in front of you and providing yourself positive feedback, like “get that guy” or “I am going to work hard and catch that person” can really change the way your race ends. You may still not do as well as you want in the race… most of us really never meet our own expectations, but mindfulness could make a race just a little more rewarding. Either way, we should all strive to be a little bit more in the moment, and learn to just breath.